The NHK Symphony Orchestra (based in Tokyo and headed by Chairman Yoshinori) is pleased to announce that it has extended the contractual period of Paavo Järvi​’s tenure as Chief Conductor by one year to August 2022.

Since assuming the post in September 2015, Maestro Järvi has presented numerous outstanding performances with the NHK Symphony Orchestra incorporating a wide repertoire unique to him, ranging from Beethoven, Bruckner and R.Strauss to contemporary music

As the NHK Symphony Orchestra will celebrate its 95th anniversary in October 2021, it hopes to further increase its concerts worldwide by embarking on overseas tours including the coming tour in Europe next spring.

We hope that performances of the NHK Symphony Orchestra under his baton will reach and delight broad audiences not only through our concerts but also by television and radio. 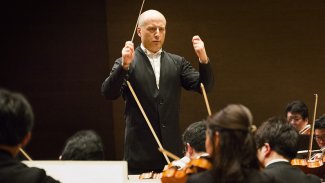