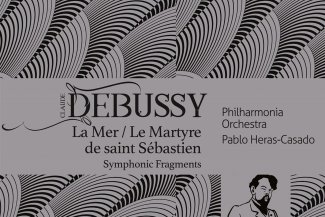 Marking the centenary of the death of Claude Debussy, Pablo Heras-Casado releases a new album on harmonia mundi dedicated to the composer, recorded in London with the Philharmonia Orchestra. The disc includes the hallmark work La Mer and the celebrated Prélude à l’après-midi d’un faune, alongside the Symphonic Fragments from Le Martyre de saint Sébastien.

Pablo Heras-Casado and the Philharmonia Orchestra have performed these works together for London audiences and received brilliant critical acclaim. The Guardian described them as ​“captivating,” stating it was a ​“wonderfully intelligent performance.”

The album is available to order here and stream here.