The Soundforms Performance Shell is a scaled up version of the product used on the London 2012 Olympic Park. The stage will accommodate an orchestra size of up to a 150 musicians and choir, with a front of stage width of 32M, a depth of 20M. The roof cantilevers 15M from the front of the stage and can carry a payload of up to 50T. The stage will incorporate a state-of-the-art ​‘Constellation’ sound system, designed and engineered by Meyer Sound. This system will provide an exemplary sound environment on stage for the musicians of the San Diego Symphony Orchestra, whilst also providing the technical flexibility required for a variety of other performances, including Pop, Jazz and Film.

San Diego Symphony CEO Martha Gilmer says the facility will represent a ​“gift to the tidelands and the entire San Diego region. First and foremost, we want to create a venue with superb acoustics that will be stunning, a postcard for San Diego”

​“I believe you’ve come up with a world-class project, something San Diegans will benefit from for many, many generations” says Dan Malcolm, Port Authority Chairman (2016). 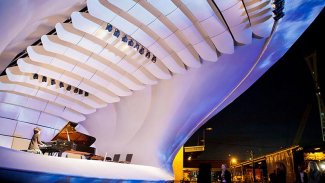