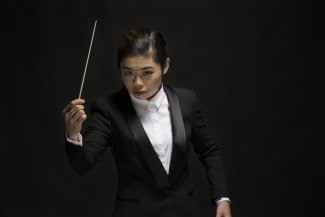 With great pride Elim Chan assumes her new role as Principal Conductor of NorrlandsOperans Symfonieorkester in Umeå, Sweden. Her first season with this prestigious orchestra will focus on landmark works such as Tchaikovsky and Mahler’s Symphony No.5, respectively, along with symphonies and concertos on a Mozart theme. Elim’s first concert in her new capacity will be on 31 August in Umeå, followed by a repeat in Skellefteå on 1 September.

In addition to its busy and varied subscription season at home in Umeå, later in the season the Orchestra and Elim will tour Sweden, including stops at both Gothenburg and Stockholm. Throughout the year, special emphasis will be focused on works by female composers, such as Jennifer Higdon, Kaija Saariaho and Anna Clyne.

The winner of the 2014 Donatella Flick Conducting Competition, Elim Chan recently made hugely successful debuts with the Los Angeles Philharmonic, Detroit Symphony and Chicago Symphony orchestras, Orchestre National de Belgique and the Royal Scottish National Orchestra where she will be Principal Guest Conductor from the 2018/19 season onwards.