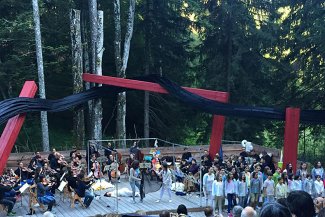 This latest project from Spira mirabilis saw the ensemble grow in numbers to incorporate a choir of children and two Italian actors. The musicians performed the incidental music that Mendelssohn wrote for the play and the actors played the different characters between them.

The enchanted outdoor location for this unique and spectacular performance was Arte Sella, an outdoor visual-arts park 3000ft up in the northern Italian mountains near the Austrian and Swiss borders.

Richard Morrison from the The Times, gave the performance 5 stars and said it was ​“the most joyous celebration of the Bard I’ve seen all year. … The brilliant Spira Mirabilis marked the 400th anniversary of Shakespeare’s death in a dazzlingly eccentric fashion”.