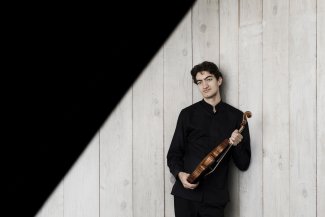 HarrisonParrott is delighted to welcome Dutch-American violinist Stephen Waarts to its roster for general management, working alongside Young Concert Artists in North America.

A laureate of the 2015 Queen Elisabeth Competition, and winner of the television audience vote, Stephen has received similar accolades at the 2014 Menuhin Competition and 2013 Montreal International Competition. He won First Prize at the Young Concert Artists Auditions in New York, aged just 17.

Stephen is currently in his final year at the Curtis Institute studying with Aaron Rosand, where he was awarded the Frank S. Bayley Annual Fellowship. He has been praised for his ​“preternatural sense of tonal color and lyrical beauty” (The Washington Post) and is already building an impressive reputation in North America and Europe.

Recent and forthcoming engagements include performances with Orchestre symphonique de Montréal, Brussels Philharmonic, Edmonton Symphony and San Francisco Chamber orchestras, as well as recitals at the Merkin Concert Hall and Morgan Library and Museum in New York, Kennedy Center in Washington DC, Isabella Stewart Gardner Museum in Boston and the Louvre in Paris. Further ahead Stephen will work with Bremer Philharmoniker, having been awarded the Mozart Gesellschaft scholarship at the 2015 Krzyżowa Music Festival in Poland.