Gabriel Venzago has been appointed Chief Conductor of the Südwestdeutsche Philharmonie Konstanz from January 2023. Concurrently with this until the end of the current season he keeps up his position as First Kapellmeister at Salzburg Landestheater where he gathered vast experience in opera with new productions of Mozart’s Magic Flute, Bizet’s Carmen, experimental theatre productions and the world premiere of the opera Cinderella by the celebrated British composer Alma Deutscher.

In 2021, Gabriel Venzago caused a stir when he jumped in at a new production of Idomeneo at the Bavarian State Opera and attracted great attention and media response with the musical direction of the opera Zaide. Eine Flucht, involving an integrative process with young refugees. 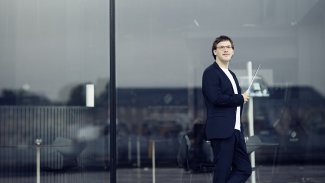