“David Briskin’s fine conducting of the orchestra makes the tremendously powerful score a seamless piece with the dancing.”

Music Director and Principal Conductor of The National Ballet of Canada since 2006, David Briskin is widely recognised as one of contemporary ballet’s most accomplished conductors.

Following the completion of his studies in conducting, beginning at Indiana University School of Music followed by the University of Cincinnati College-Conservatory of Music, and concluding with a Master of Arts degree from The Aaron Copland School of Music at Queens College, City University of New York, Mr. Briskin began his career as a freelance conductor in New York. Early in his career, he served for seven years as Music Director of the 150-voice Masterwork Chorus and Orchestra, a tenure highlighted by annual performances of Handel’s Messiah at Carnegie Hall. He also served as Artistic Coordinator of Education for The Chamber Music Society of Lincoln Center while leading youth and semi-professional orchestras. His first engagement with dance was with the Erick Hawkins Dance Company, where he conducted performances at the Joyce Theatre in New York, in Japan, and on tour throughout the US.

In 1993, he began a 13-year relationship with The Juilliard School as conductor for the Dance Division which led to opportunities to conduct for the companies of Martha Graham, Paul Taylor and José Limón. His first engagement as a guest conductor in classical ballet was with the Milwaukee Ballet. His second was with American Ballet Theatre, where he spent seven years working with such luminaries as Susan Jaffe, Julie Kent, Paloma Herrera , Jose Manuel Careño, Angel Corella, and Julio Bocca among many others. He conducted performances at the Metropolitan Opera, New York’s City Center, and on tour, both in the US and abroad, working with a generation of ballet masters, mistresses and coaches including Freddie Franklin, Georgina Parkinson and Irina Kopolkova.

While with ABT, Mr. Briskin also guest conducted for the ballet companies of San Francisco, Houston, Joffrey, Alberta, and Les Grands Ballet Canadiens. His first appointment as Music Director was with Pittsburgh Ballet Theatre, where he served for three years, followed by a three year engagement with New York City Ballet as a seasonal guest conductor, conducting some 40 ballets at The New York State Theatre, Saratoga Springs and on tour in the US and Europe.

“Kudos must also go to conductor David Briskin and the National Ballet Orchestra. The music soared to glorious heights in the famous themes from Rimskij-Korsakov’s Schéhérazade, while in complete contrast, the orchestra perfectly captured the edgy modernism of excerpts from the works of Shostakovich.”

“And this being the National Ballet of Canada, it is, as usual, borne aloft by the seemingly flawless efforts of the NBOC Orchestra, masterfully conducted once again, by David Briskin.” 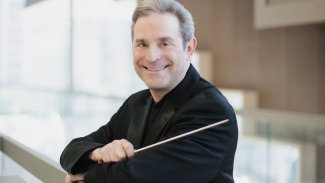