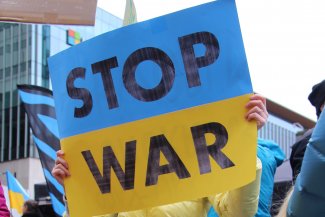 An orchestral flashmob performance protesting against the invasion of Ukraine and its people by the Russian Government has been organised for Sunday 6 March, performing the Ukrainian National Anthem, Lysenko’s Prayer for Ukraine, and Silvestrov’s Hymme 2001. As Kyiv, Kharkiv, and numerous other Ukrainian cities are being brutally bombed, as hundreds of tanks are crossing the Ukrainian border to capture its capital, Ukrainian people are showing an amazing spirit of resistance and true bravery.

Hundreds of musicians from all backgrounds will gather on Trafalgar Square to show their support for the Ukrainian people. Conductor of the performance Petr Limonov shares: ​“We feel it is our duty to do as much as we humanly can for this cause, and I urge everyone who can be there to come and join us in this fight for Peace. It is right now that the fate of Ukraine is being decided, and our hearts are with its citizens.”

This event has been organised by Juliet Barclay and Eva Pires.

Follow #PLAYFORUKRAINE on social media where the flashmob will be live-streamed.

Watch a video of the flashmob below: