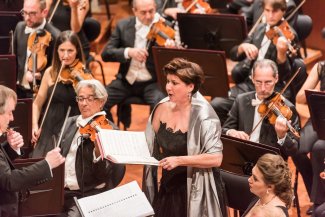 Today we mourn the death of Polish soprano Aga Mikolaj, who had lived in Munich since her early career years as a member of the Bayerische Staatsoper where she sang a multitude of principal roles including Mozart’s Countess, Fiordiligi and Donna Elvira alongside Micäela, Eurydice, Ännchen and Freia to name just a few. Mikolaj graced the stages of many of Europe’s most important opera houses and was a prolific and hugely successful concert performer, working in recent years with many of the world’s top conductors including Daniel Barenboim, Gustavo Dudamel, Semyon Bychkov and Kirill Petrenko. Hers was a career with many performance highlights including Barenboim’s Ring Cycle presented at Teatro alla Scala, Berliner Staatsoper unter den Linden and the BBC Proms, Alice Ford alongside Bryn Terfel’s Falstaff at Opéra de Monte Carlo, Tatyana in Eugene Onegin at Semperoper Dresden under Omer Meir Wellber and Donna Elvira in Don Giovanni on tour to Japan with Wiener Staatsoper under Seiji Ozawa. In September 2020 during a run of concert performances of Don Giovanni in Palermo, Aga stepped in for an ailing Donna Anna in the final concert, singing Anna’s arias ​“exquisitely” alongside her own role of Donna Elvira. She brought the house down and was described by her grateful colleague, Sarah-Jane Brandon, as ​“brilliant and fearless, a great colleague, singer and woman”.

In 2011, Aga Mikolaj was presented with the TZ Rose at Bayererische Staatsoper for her performance as Micäela in Carmen alongside Jonas Kaufmann, and in 2013 she was soloist with the Philharmonia Orchestra under Christoph von Dohnànyi in a special Wagner Gala performed at Buckingham Palace to celebrate Prince Charles’ 65th Birthday, and the 35th anniversary of his Patronage of the orchestra.

A student of the late Elisabeth Schwarzkopf who described her as ​“possessing one of the most beautiful soprano voices of our time”, Aga Mikolaj’s voice will forever be remembered through her varied discography including her critically-acclaimed compilation of Mozart and Strauss, two of the composers with whom she was most associated across her career, recorded with the WDR Rundfunkorchester Köln and conducted by Karl Sollak.