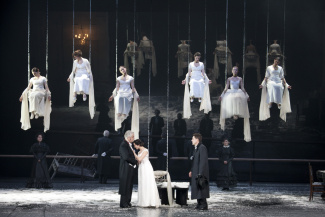 Eugene Onegin directed by Rimas Tuminas is extremely popular worldwide: it was successful in Europe and North America, in China and Israel.

Rimas Tuminas doesn’t aim at a full scenic adaptation of Alexander Pushkin’s legendary novel in verse. For his main theme, he chooses a story of Tatyana’s love for Onegin, a story with prologue and epilogue.

The performance unfolds in the memory and imagination of the characters, the images are split between past and present. Therefore, there are two Onegins on stage: the mature one recalling the events and the second, younger one who takes part in them.

From the director, Rimas Tuminas:

“I wished to break the stereotypes. While working on the production of ​“Eugene Onegin” I was searching for a symphony of meanings, trying to approach the emotional and musical harmony of the novel. At the same time, it was extremely important to avoid exaggerated sensibility.

Eugene Onegin is the Light and the Beauty. In general, the Theatre is a territory of Peace and its Mission is to bring harmony in this world with love. It’s the meaning of Art to expand ethical values, virtue and to attempt to make the world brighter.”

Total run time: 3 hours (no interval)
Tickets: £10 and Pay What You Feel (Pay the price that works for you. But when choosing your price please consider the number of people who might be watching with you).
Date: 4 November 19:30 (various time zone available)
Book here