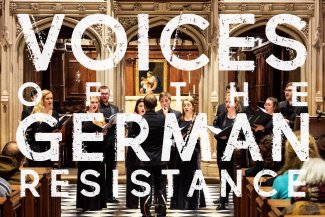 ‘We will not be silent. We are your bad conscience. The White Rose will never leave you in peace!’.

In 1943 five students and a lecturer at the University of Munich were executed. They had been members of The White Rose, a clandestine group that wrote and distributed pamphlets calling on Germans to resist Hitler. The members of the White Rose witnessed at first hand the persecution and suffering caused by Nazism and World War II. They had a passionate belief in the freedom of the individual and social responsibility and turned their outrage into action. As they boldly declared in one of their resistance pamphlets: ​‘We will not be silent. We are your bad conscience. The White Rose will never leave you in peace!’.

​‘Voices of the German Resistance’ is a collaboration between the award-winning vocal ensemble SANSARA and The White Rose Project, a research and engagement initiative at the University of Oxford. Together, they are exploring the history of the White Rose through an exciting repertoire of choral music and through the resistance group’s writings in new English translations by students at the University of Oxford. These texts speak movingly of courage, conscience, and life under dictatorship.

Dr Alexandra Lloyd (University of Oxford) will introduce the story of the White Rose and SANSARA’s project to bring this hidden history to English-speaking audiences, in conversation with Tom Herring (Artistic Director, SANSARA). This will be followed by the concert ​‘Voices of the German Resistance’, recorded on the 77th anniversary of the first White Rose trials and executions on 22 February 2020, SANSARA’s last live performance before lockdown.

SANSARA is an award-winning vocal collective uniting the next generation of choral artists with a vision to inspire, engage and connect people through choral music-making. Choirs are living, breathing instruments — bodies of voices with unparalleled expressive potential and powerful symbols of human coexistence. We harness this creative force through our engaged musicianship, communicating with passion and integrity to conjure spell-binding atmospheres.

Concert streams on Virtual Circle Sunday 9 May, 19:00
Tickets: £5
A pre-concert introductory video, programmes notes and reading texts will be included in your e‑ticket.
Available in a range of time zones
Click here to buy