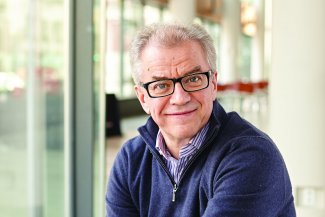 In May and June 2017, Curtis Symphony Orchestra embarks on an ambitious tour of Europe, visiting nine cities in eighteen days. The charismatic music director of the Minnesota Orchestra, Osmo Vänskä, leads programmes that include Ravel’s Daphnis et Chloé Suite No.2, and Strauss’ Ein Heldenleben.

Soloists are drawn from the ranks of Curtis graduates: Peter Serkin (Piano ​’64) is featured in Brahms’ Piano Concerto No.1 and Benjamin Schmid (Violin ​’91), and Curtis President Roberto Díaz (Viola ​’84) perform Penderecki​’s Concerto doppio, a modern classic that received its U.S. premiere in 2014 by the same performers. Schmid performs on his Stradivari ​‘ex Viotti’ – ​‘ex Arnold Rosé’ (1718), an instrument which was built during Stradivari’s so-called ​“golden period”.

Performances take place at Helsinki Music Centre (20 May), Bremen Glocke (22 May), Berlin Konzerthaus (23 May), Dresden Kulturpalast am Altmarkt (24 May), London’s Cadogan Hall (26 May), Salzburg Mozarteum (29 May), Vienna Konzerthaus (30 May), Wroclaw National Music Forum (31 May) and Penderecki European Centre for Music in Luslawice (2 June).