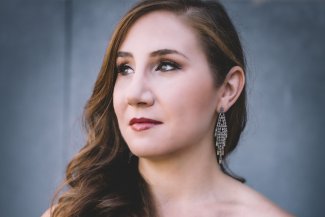 A recent graduate from The Ryan Opera Center programme at the Lyric Opera of Chicago where she performed and covered a number of roles including Contessa Almaviva (Le nozze di Figaro), Vitellia (La clemenza di Tito), Hanna Glawari (The Merry Widow), Countess (Capriccio) and Marianne Leitmetzer (Der Rosenkavalier). Laura will return to Chicago next season as Freia (Das Rheingold) as well as to Arizona Opera to create the role of Jane Withersteen in the world premiere of Riders of the Purple Sage.

“Wilde, making her European debut, is quite a find, a warm-voiced soprano with real lustre in her tone, and a deeply affecting, if finely understated, actress: Jenůfa’s numbed grief for her dead baby tears you in two, as it should.”

“Throughout, her delivery and body language are truthful, her upper register flawlessly radiant.”

“Laura Wilde’s empowered lyricism helps lift Jenůfa out of the painful trials that beset her into wisdom and maturity.”