David Zinman named as 2015 ECHO Klassik Conductor of the Year 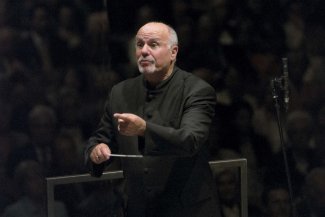 David Zinman has been named as the 2015 ECHO Klassik Conductor of the Year for his recording of Mahler’s Das Lied von der Erde and Busoni’s Berceuse élégiaque with Tonhalle-Orchester Zürich on RCA.

This recording concludes Zinman’s critically acclaimed Mahler cycle which he started with the Tonhalle-Orchester Zürich in 2007. Upon reviewing the Symphony No.8 CD The Guardian said, ​“it’s the measured, musical nous of Zinman’s conducting that really deserves the spotlight”. The same newspaper went on to award the Symphony No.9 CD five stars and noted, ​“The performance is superbly controlled and wonderfully articulated…there are passages where Zinman achieves an intensity that is overpowering”.

During the 19 years that Zinman held the position of Music Director with the Tonhalle-Orchester Zürich (it came to an end in summer 2014), he not only significantly raised their international profile but he established an extensive and diverse discography with them. In celebration of their recording legacy, Sony Music Classical released a 50-CD box set, David Zinman – Great Symphonies: The Zurich Years, in March 2014. The set not only includes the award-winning Mahler recording but also the acclaimed Beethoven albums and the complete cycles of works by Brahms, Mahler, Schubert, Schumann and Richard Strauss.