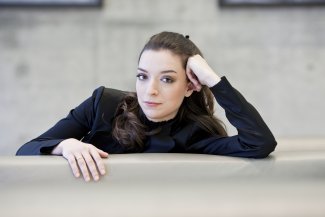 This week Yulianna Avdeeva joins the Kremerata Baltica for three concerts (13 – 14 June) at the Wiener Festwochen, performing works by Weinberg and Shostakovich as part of the project ​‘Hommage an Mieczysław Weinberg’.

Yulianna continues this season with a busy agenda of European summer festival recitals, including an appearance at La Grange de Meslay (28 June) where she performs an all-Chopin programme which includes the composer’s 24 Preludes — released on disc by Mirare last year. This is followed by a solo recital at Festspiele Europäische Wochen Passau (12 July) where Yulianna performs the world premiere of étude II by Philipp Maintz, a work that has been composed for her.

She will also appear at this year’s Chopin Festival gala concert in Warsaw (29 August) — performing Rachmaninov’s Rhapsody on the Theme of Paganini with the Warsaw Philharmonic Orchestra conducted by Jacek Kaspszyk — as well as the Nohant Festival Chopin, the Chopin Festival Duszniki Zdroj and the Festival International de Piano La Roque d’Anthéron where she is a regular guest.