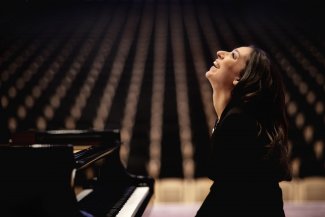 Marking Avdeeva’s debut with the orchestra, she joins them in concerts at the Aichi Arts Center in Nagoya (28 February), Tokyo Electron Hall Miyagi in Sendai (1 March), Muza Kawasaki Symphony Hall in Kawasaki (2 March) and Suntory Hall in Tokyo (3 March).

Avdeeva has built up a strong profile in Japan through regular appearances on major concert and recital tours. She maintains key links with Japan’s top orchestras — the 2014/15 season has already seen her perform with the NHK Symphony and Osaka Philharmonic orchestras — and she collaborates with Tugan Sokhiev again this autumn as part of her next tour of Japan with Deutsches Symphonie-Orchester Berlin. Upcoming highlights also include a tour with La Folle Journée to Japan following her acclaimed appearance as part of the festival earlier this month.