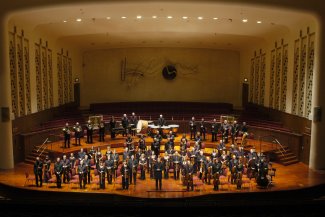 Prague once again welcomed the Royal Liverpool Philharmonic Orchestra, a regular guest in the city with nine visits in the last 20 years. As part of the Prague Dvorak Festival they gave a concert in the magnificent surroundings of the Rudolfinum with Music Director Vasily Petrenko, performing Dvořák’s symphonic poem The Wood Dove and Rachmaninov’s Symphony No. 3, and were joined by Lukáš Vondráček in a lyrical performance of Liszt’s Piano Concerto No. 2. Prior to this, the Orchestra and Petrenko had given two rapturously received concerts in Bucharest as part of the George Enescu Festival. Stravinsky’s Symphony in Three Movements and Prokofiev’s Symphony No. 7 featured alongside the Rachmaninov work, with soloists Midori and Alexei Volodin joining for Walton’s Violin Concerto and Prokofiev’s Piano Concerto No. 3 respectively.