Joseph Davies has been hailed as ​“one of the brightest of rising stars” (Bernard Clarke, RTÉ) whose music, described as ​“extraordinarily vivid and exuberant” (Ivan Hewitt, BBC Radio 3) has been performed and broadcast throughout Europe and the USA.

Recent projects include Davies’ violin concerto Parallax (2022) for BBC National Orchestra of Wales and soloist Daniel Pioro under the baton of Ryan Bancroft at BBC Hoddinott Hall, and Collider (2021) for UPROAR Ensemble, which toured around Wales from February to April 2022.

Davies’ commissions range from virtuosic chamber-size pieces for some of the most gifted musicians of his generation, to large-scale works for ensembles including several pieces for the BBC National Orchestra of Wales. These include Hymn to Hermes (2018) for The Hermes Experiment, the orchestral song cycle The Shortest Day (2016), setting specially written texts by former Archbishop of Canterbury and poet Dr Rowan Williams to commemorate the 50th anniversary of the Aberfan disaster, and Intricate Images (2014) for harpist Catrin Finch and cellist Steffan Morris.

His wide-ranging collaborations include arrangements for Meilyr Jones’s prize-winning album 2013 (2016) on Moshi Moshi, and Carnation, Lily, Lily, Rose (2017) for the Tate Britain, and two albums for Baxter Dury; Prince of Tears (2017) and The Night Chancers (2020), both on Heavenly Recordings. In 2017 Davies’ wind orchestra piece Anemoi (2016) was nominated for a BASCA British Composer Award and he was awarded the Sir Geraint Evans Prize by the Welsh Music Guild.

“One of the brightest of rising stars … enormously assured and accomplished” 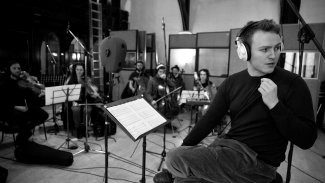