Founded in London in 2001, Boy Blue, the award-winning brainchild of composer Michael ​‘Mikey J’ Asante and choreographer Kenrick ​‘H2O’ Sandy MBE, encapsulates the pulse of the city it was born in.

Outside of the theatre, Boy Blue collaborated with Danny Boyle to contribute to the Opening Ceremony of the London 2012 Olympics, Sandy leading hundreds of young dancers before staging the handover of the Olympic torch and the lighting of the Cauldron. 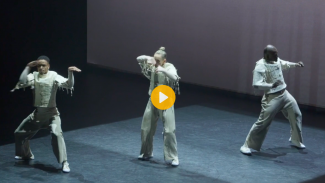 “A triumph from start to finish.”

“There can be few people to whom British hip hop dancing owes a greater debt than choreographer Kenrick Sandy and composer Michael Asante.”