Maestro Bickram Ghosh is widely considered to be one of India’s greatest versatile artists. He is one of the rare artists who excels in three musical fields simultaneously. These are Indian Classical, Experimental and Film scoring.

Bickram has a formidable reputation as one of the world’s greatest classical Tabla players. He has played on several Grammy nominated albums and one Grammy awarded album. He is also heralded for being one of the driving forces of experimental music.

Further, he is also an extremely successful film music director having scored for 45 feature films, one of which got him no less than an Oscar contention.

Having performed the world over with the greatest names in classical music (especially Pt. Ravi Shankar with whom he played for over a decade), Bickram later went on to form his band Rhythmscape. Bickram’s subsequent successful solo albums have consolidated his position as a pioneer of a new experimental sound.

Rhythmscape, Bickram’s signature band performed at the Forum at Barcelona where the band shared the stage with Sting, Phil Collins, Norah Jones and Bob Dylan. 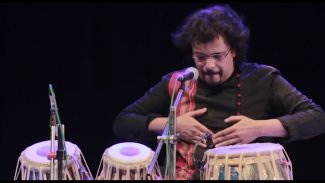