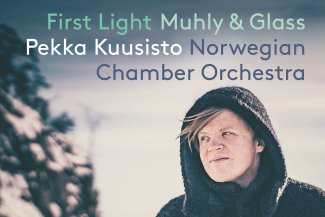 Muhly is one of today’s most celebrated classical composers with works spanning instrumental, orchestral and choral music, to film music and opera, being the youngest composer ever commissioned by the Metropolitan Opera.

Muhly writes about the work:

​“Shrink (Concerto for Violin and Strings) is in three movements. Each movement obsesses over certain intervals: the first, ninths; the second, sevenths; and the final, a tiny set of anxious intervals between unisons and fourths. The overall structure suggests an intensifying focus on these small building-blocks, a process that is reflected in the speed of each movement. The first proceeds quickly, becomes aggressive, and dissolves into small fragments. The second movement is slow and taut, with a looped sequence of chords whose character becomes increasingly thick and heavy. The last movement is fast, nervous, and scattered, with occasional giant unisons coming in and out of focus.”